Showing posts from April, 2017
Show All

- April 14, 2017
I originally put this article together for the Facebook group I run for 7.5 ton vehicles (self-build motorhomes but also including overlanders, RVs and factory made motorhomes). As my insurance was due I ended researching insurance as it is a bit more specialist when you have a 7.5 ton lorry conversion! I ended up ringing all the companies listed for insurance so have added notes about them and the sort of requirements they ask for. I have not investigated all the breakdown companies listed as I got breakdown included with my insurance at a very reasonable cost. This article is very much geared towards bigger vehicles but all these companies will cover smaller campervans and some I found out will only cover those! It is also geared towards self-builds which is relevant whatever the weight or size of vehicle as not all insurers will look at self-builds. I hope you find it helpful, please let me know if you do and any feedback on the article or any of these companies will be gra
Post a comment
Read more

Results at last from exercising! 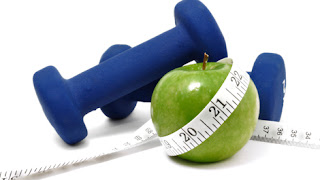 Just a very quick blog post as I'm very happy today as in just 8 days I have lost 4lbs! My previous post from a few days ago goes into a lot more detail so I won't go over all that again, you can read it HERE . I weighed myself today and have been given a boost as that clearly shows that the exercise and diet combined produces the sort of result I want to see. I know I might not continue to loose that amount of weight each week but even 2lb every week would be fantastic! The only downside is Easter weekend, despite being at work cakes have been bought and there is a Christmas pudding saved for this very weekend and so cream has been bought too. So everything in moderation, I refuse to deny myself entirely but need to be very careful. Already today even though it should be a fast day I have had a very light tea (just a small piece of quich) and 3 mouthfuls of very creamy cake, eeek! I have been feeling unusually hungry today and although I have had no pain it is about the
Post a comment
Read more 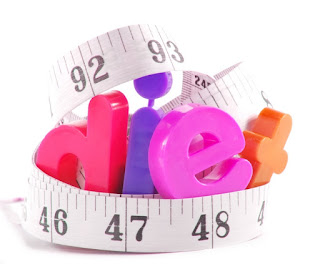 Hello dear readers :) Just a brief catch up on the weightloss/healthy eating lifestyle I am trying to get my head around and stick to!  The last time I wrote I was away working for another 2 weeks and doing well sticking to the fast and feast days but not so well with the exercise. I felt I had lost a couple of pounds but the scales in Boots were out of order so no way to tell! On my 2 weeks off I thought I had done OK although I did make flapjacks and buy a cheesecake and had some pretty big meals. I has bought a new skirt when I had been at work and although it was tight when I bought it when trying it on when my 2 weeks off were nearly up I couldn't do it up. Lucky it was only £3 from a charity shop! My worst fears were confirmed once I was back at work and went on the now fixed scales at the local Boots and found I had put on 2lbs since January :( I have also been having lots of tattooing done at the top of my leg so have been looking at lots of photos of parts of my body
Post a comment
Read more

Check out all my Ebay listings... please!

Lots and lots of new stuff now made ready for the 2017 summer season of festivals, gatherings and hopefully the odd car boot although I keep saying I'll do one and never get round to it!! I still have some more bits to make and am trying to use up some of the things I've collected over the past few years. I was given loads of beads about 5 years ago which I am still using up and have a huge collection of shells which need making into windchimes as well as some other bits and bobs that have been hanging around way too long!  I will be going away again at the end of the year for 5 months in Europe and would quite like to concentrate on writing for a while. I find that it is quite hard to make cards, paint pictures, make craft items, run a website and blog as well as write, and that's on top of working full-time! Writing has certainly been on the back burner for the last couple of years, well fiction writing which I used to do quite a lot of. Obviously I write a bit on th
Post a comment
Read more 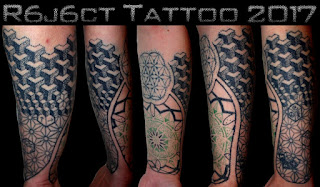 It has been a long time coming but after 7 months last year building our new home my partner has this year been able to get his business up and running again. Being a mobile tattoo artist has many advantages but we needed a decent space for that to happen hence buying a lorry! Now our home is (almost) complete Si has been busy tattooing folk from the truck. We use our living room area as a tattoo space as do not have a separate studio but I am fully trained in infection control and so no need to worry about contamination. Everything he uses is disposable except the actual machine which is cleaned after every use with pure alcohol. All needles are one use only and disposed of in a sharps bin immediately after a tattoo. Although now quite the same as the near sterile environment of a specialist studio remember tattoos were (and still are in many parts of the world) performed at home with very little problem. He is able to travel for very large pieces if the client is happy to be tatt
Post a comment
Read more 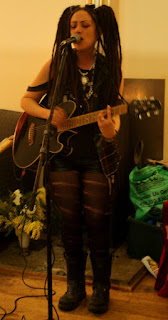 I was lucky enough to be invited to the launch of a new exciting project by Cara from one of my favourite bands, The Defekters. Cara has launched her own solo project and is taking it around the UK this summer busking some towns and playing at various events and festivals. Cara Means Friend (because it does) is the title of Cara's project and her new 5 track EP. For those of you who know Cara from The Defekters you will know her vocal and writing talents are amazing and this EP does not disappoint. The opening track, Skankrobber, is her take on the famous Bank Robber song by The Clash with lyrics highlighting the corruption of our government. Second track Fairyfails is a song to all the women that as little girls are told they are princesses. Are You Ready comes next with some lovely group vocals by a local home education group singing a catchy hook that I dare you not to be singing by the second play of the track. We are Lions is the fourth track and my favorite from this co
2 comments
Read more
More posts