Showing posts from February, 2007
Show All

troops out of iraq, no trident protest march video

troops out of iraq, no trident protest march 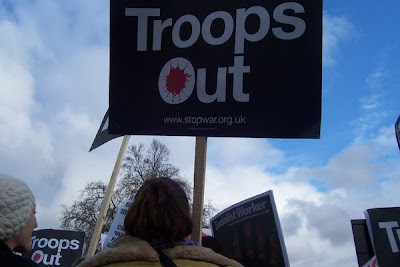 yesterday saw me and the spark travelling to london on the peace coach from gloucester for the 'troops out of iraq, no trident' protest march from hyde park to trafalger square, organised by the CND and STOP THE WAR COALITION and THE BRITISH MUSLIM INITIATIVE . a brilliantly diverse mass of people walked through the streets of london banging drums, chanting and blowing whistles. some were dressed up in fabulous costumes, some were in their everyday wear, all were united in a need to get the message to the government that we do not want this illegal war in our name. the feds put the number as 10,000 the organisers put it nearer 100,000. after a peacefull but very noisy march we ended up in trafalger square where there were a few stalls with petions to sign and badges, stickers or t-shirts to sell. there was also some guest speakers including the inspiring brian haw, mark thomas and tony benn. of course we then walked totally the wrong way to get the coach home leaving the
1 comment
Read more 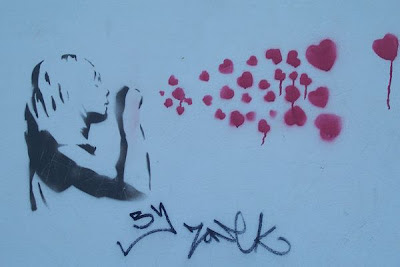 big up and nuff respect for gloucester's very own banksy style graffiti artist..... lets have more of this artwork brightening up our streets please!
Post a comment
Read more 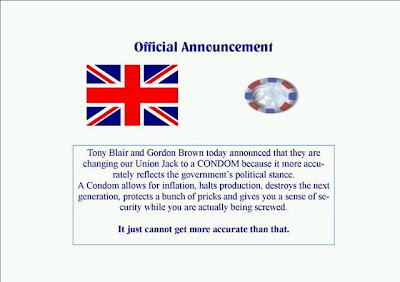 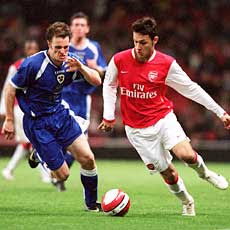 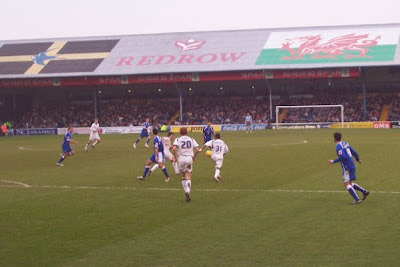 every time i told someone in the week before hand that i was going to the cardiff v leeds game on saturday they came out with one of two responses, either they would say "have a pie and a bovril at half time" or they would say "oh my god there's gonna be trouble there, watch yourself" needless to say neither response made me feel great about going! being veggie the thought of a meat pie and bovril didn't please me despite the completely false rumours about the amount i eat. even worse the thought of being caught up in any sort of football violence was a little scary! me and the spark arrived at iguana HQ only to find the iguana was not at home so we took a stroll round the block until he came back from the shops. we headed straight off to cardiff on the train, grabbed a quick bite to eat on the way to the pub and made ourselves comfortable in a pub packed with city fans. the music was pretty good, lots of cool old ska stuff but i did feel like i was in a b
1 comment
Read more

- February 11, 2007
me and the spark went to cardiff new theatre last night to see 'to kill a mockingbird'. i haven't read the book or seen the film so i didn't really know the story. it was quite a disturbing tale of racism in the deep south of america during the depression. thought provoking, entertaining and well acted i enjoyed every minute of the play. last week was great at the start, saw lots of mates while lee was away in poland and enjoyed the 'calm before the storm' at work as we have now finished up at the NEC and so have huge amounts of orders to fulfill! then lee came back from poland with the flu and has been proper poorly ever since, we even went to the doctors on friday. i can't remember the last time we went there! i have had a cold which thankfully didn't hang around too long, but has made me feel a bit crappy and tired. so now lies ahead a full-on week at work but thats cool as friday will come all the sooner and i'll be off to wales again. i'
1 comment
Read more

one for the girls and for the boys to tell the girls!!

- February 02, 2007
OK i'm really not going to turn this blog into a series of you tube videos but this was too good not to put up here. A cause I've plugged (pardon the pun!) for years, usually to deaf ears to most of the female population! 3 billion disposable menstrual are bought ever year in the UK alone! So if you're a girl think about all the money you spend on sanitary products and how much waste you make by using conventional products. If you're a boy watch the video and tell your wife, girlfriend, mum, sister, daughter etc! Washables are what I use and what they don't mention in the video is that if you rinse them out in cold water once used the water becomes a very rich plant food.... bonus! More information on the sustainability page of my website HERE and links to relevant sites in the sustainability section of my links page HERE .
2 comments
Read more

- February 01, 2007
monday was national phone in sick day, well acording to cardiff band sicknote it is anyway. there was a great gig on the night before in cardiff to launch sicknotes new single with eat static playing as well as loads of other bands. now i guess you're expecting a write-up and pictures of this amazing gig? well i didn't go :-( so tuff shit, check out clints blog instead! when you work in a small family buisness there are some great perks but there are also times when it sucks. i couldn't phone in sick on monday as this week is one of our busiest as we prepare for the spring fair at the NEC. the first part of the week has been spent packing things into boxes and putting things in vans. today and for the next couple of days i will be at the NEC building our stand. then next thursday i have to go up and take it all down again and load it back into vans where i unpack it again at my warehouse AAAARRRRGGGGHHHH!!!! it's enough to drive you crazy. then we'll have load
2 comments
Read more
More posts