- October 20, 2011
In the area of Carnac & further south we visited quite a lot of other Neolithic sites. France is rich in Neolithic history & there are a huge amount of Dolmens, Menhirs & Cairns around the country. Many are marked on an average road map of France & they are usually well signposted. We found that we often found a few more on the way to one marked on the map. We saw an interesting one near Carnac called Dolmen de Mane Kerionned, there is 3 Dolmens on the site. One is completely underground & on a few of the stones inside there are authentic engravings. At Locmariaquer there is also a Cairn with engravings inside, be warned though the site there is 5 Euro per person entry fee. There are plenty of sites to visit for free including another Alignment at Kerzerho which is impressive even though it is not on the same scale as the Carnac Alignments. One of the biggest Dolmens we visited was the Dolmen de la Frebouchere which has an 100 ton cap stone. We have now finished our tour of the Neolithic sites & are heading towards Spain now :) We parked up on the way at Pointe de l'Aiguillon which is just North of La Rochelle near l'Aiguillon-sur-Mer, the town has an Aire but we decided to go out to the point where there is also plenty of places to park. 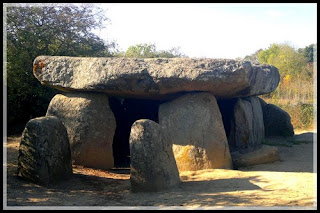