- July 22, 2020
Recently I was parked in my motorhome at Fortaleza de Sagres in the carpark within a designated bay. At approximately midday three GNR agents told everyone in motorhomes in the carpark that they were not allowed to 'camp' there, they were only allowed to 'park'. They told me and others that we were not allowed windows open. At approximately 15:00 four different GNR agents came to the car park and insisted that windows needed to be shut and doors closed. The temperature at the time was over 30°.
They took photographs of my van and took a photograph of my partners passport. They did not give a reason for this when asked why. They were unfriendly and unhelpful as well as intimidating for some visitors to the carpark.
My friend has a dog and needs windows open when he is parked for ventilation. A young woman from the UK was there and had only been in Portugal for two days and was intimidated enough to close herself in her van in the extreme heat. A Dutch couple with a child asleep in their motorhome were told they had to close all windows and doors. A Spanish couple with two children were told to take in their steps and their dogs who were tied up and happily sleeping in the shade underneath their motorhome. There were numerous other tourists who were told similar by the GNR.
As a visitor to Portugal and more specifically to the Costa Vicentina Natural Park I was extremely offended by the GNRs presence in the car park. No crimes were being committed and people were just there enjoying the surroundings. No one there was littering, no one was emptying their grey or black water or doing anything that could harm the natural environment or upset other visitors. For seven policemen carrying guns to intimidate tourists seems very extreme.
There was a yellow weather warning for extreme high temperatures that day and I strongly feel that to make people close their windows and doors on any occasion but especially with such high temperatures is an infringement of human rights.
The next day I visited the GNR station at Vila do Bispo to ask if it is correct that the GNR can make members of the public keep their windows and doors closed. They told me that in the Costa Vicentina Natural Park that is one of the laws and I can be fined for not complying. They gave me a copy of the rules which has no law or issuing authority quoted, which you can see below. 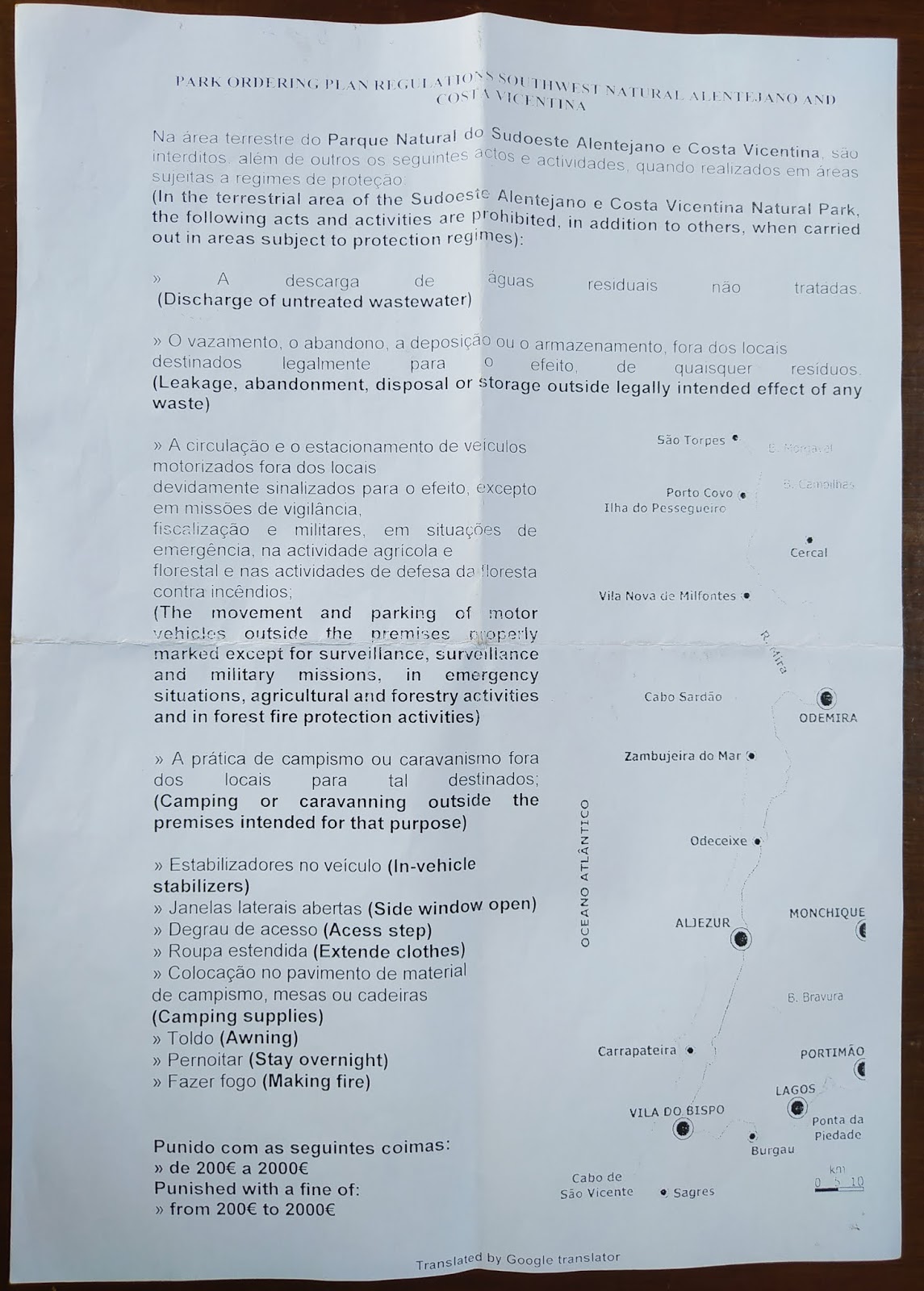 I understand their is sometimes a problem with people in motorhomes staying for long periods of time in the park areas and a minority of those people sometimes leave litter, dispose of waste water or make a nuisance of themselves. This is not a reason to penalize everyone who wants to visit the parks and I would go so far as to say that it puts people off ever visiting the area again. In this year of tourism facing an extreme decline due to the global pandemic of Covid-19 I find it strange the authorities are so unwelcoming.
With motorhomes becoming increasingly popular, and perhaps even more so due to Covid-19 as people can be self contained, why not be more welcoming? France has the right idea with many 'Aires' ranging from free ones to ones that have almost campsite like facilities for a fixed price per 24hrs. Portugal has very few 'Aires' and this seems like a missed opportunity to welcome motorhomes to the area.
Below is a copy of an email from Major Paulo Gomes, the operations director at the GNR road and traffic safety division. He clearly states there are no laws stopping people parking overnight and/or sleeping in vehicles as long as the vehicle is parked legally which is contradictory to the leaflet the GNR at Vila do Bispo gave me. 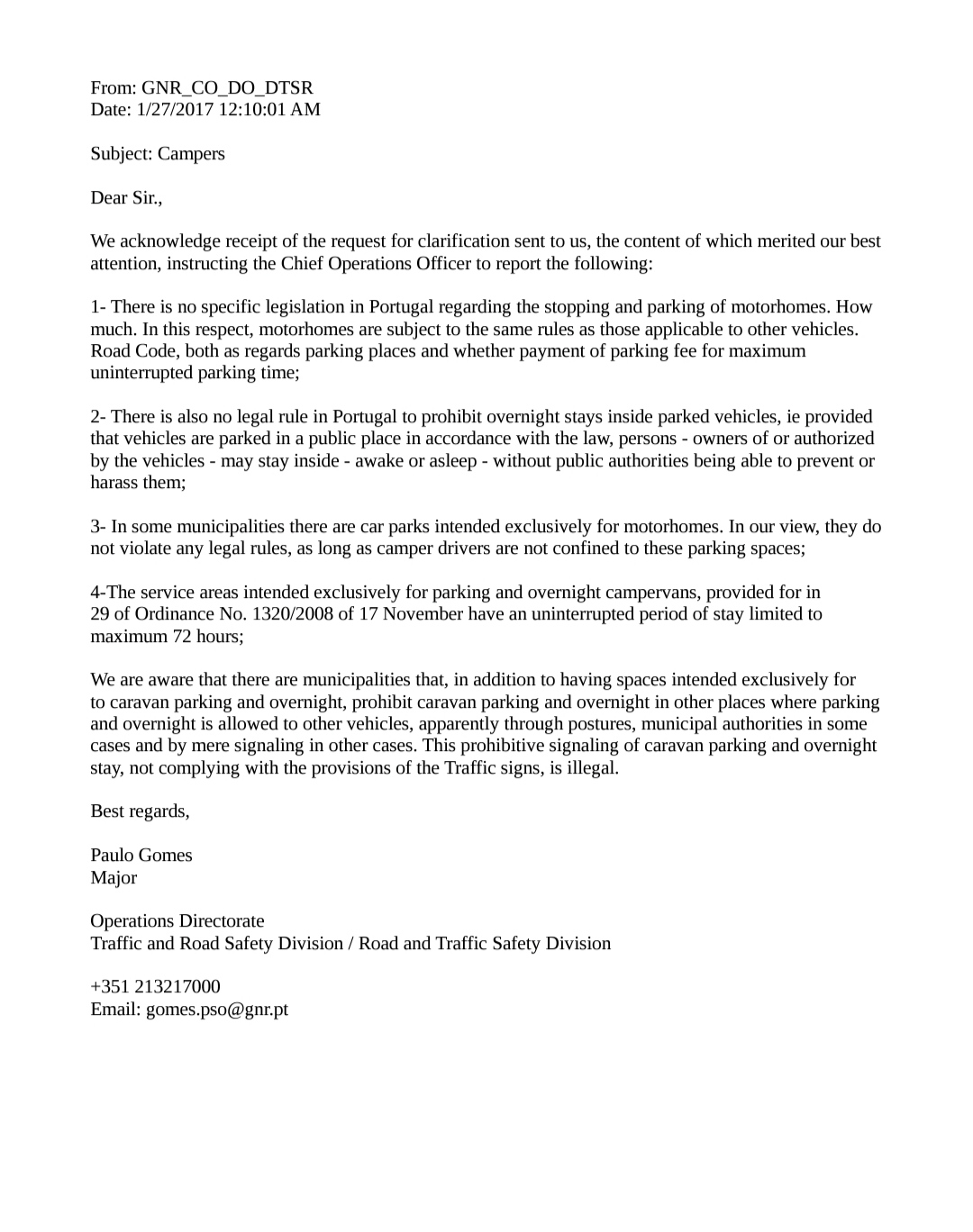 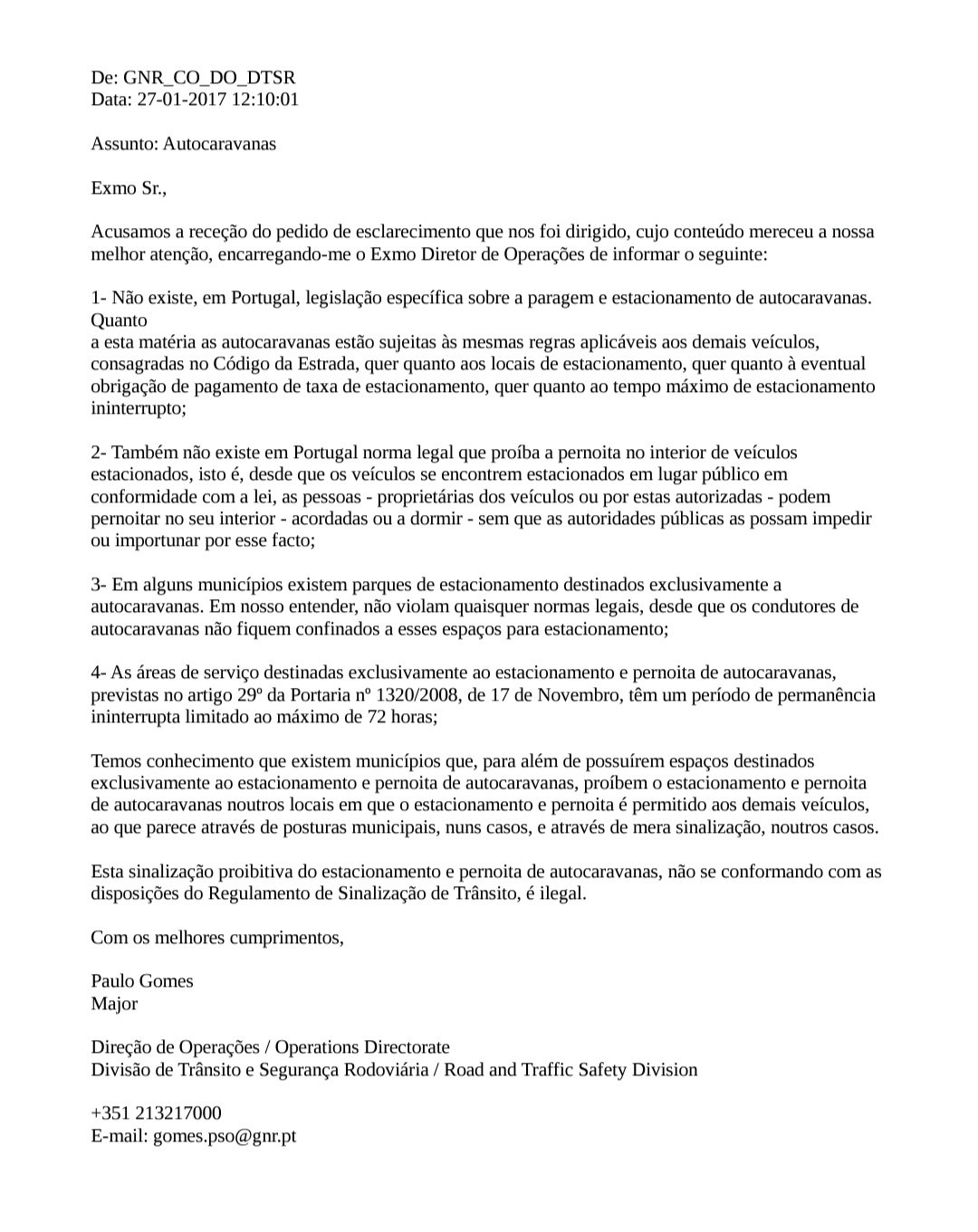 I have written to the authority that maintains all the natural parks in Portugal, the council and the GNR.
I'm hoping they can clarify the following points:
1. That they agree with this method of policing the natural park area.
2. That any day visitors to the natural park have to spend the whole day there in the surroundings and cannot take a siesta, have lunch or engage in any activity that means they are in their vehicle.
3. That these rules lapply to every vehicle owner using the park, not just motorhomes.
4. What the actual law that covers all the points in the rules on the paper I was given is.
5. What is camping as opposed to parking as to most people camping means staying overnight. To have a chair outside to enjoy a picnic is surely not camping.
Thanks for reading :) 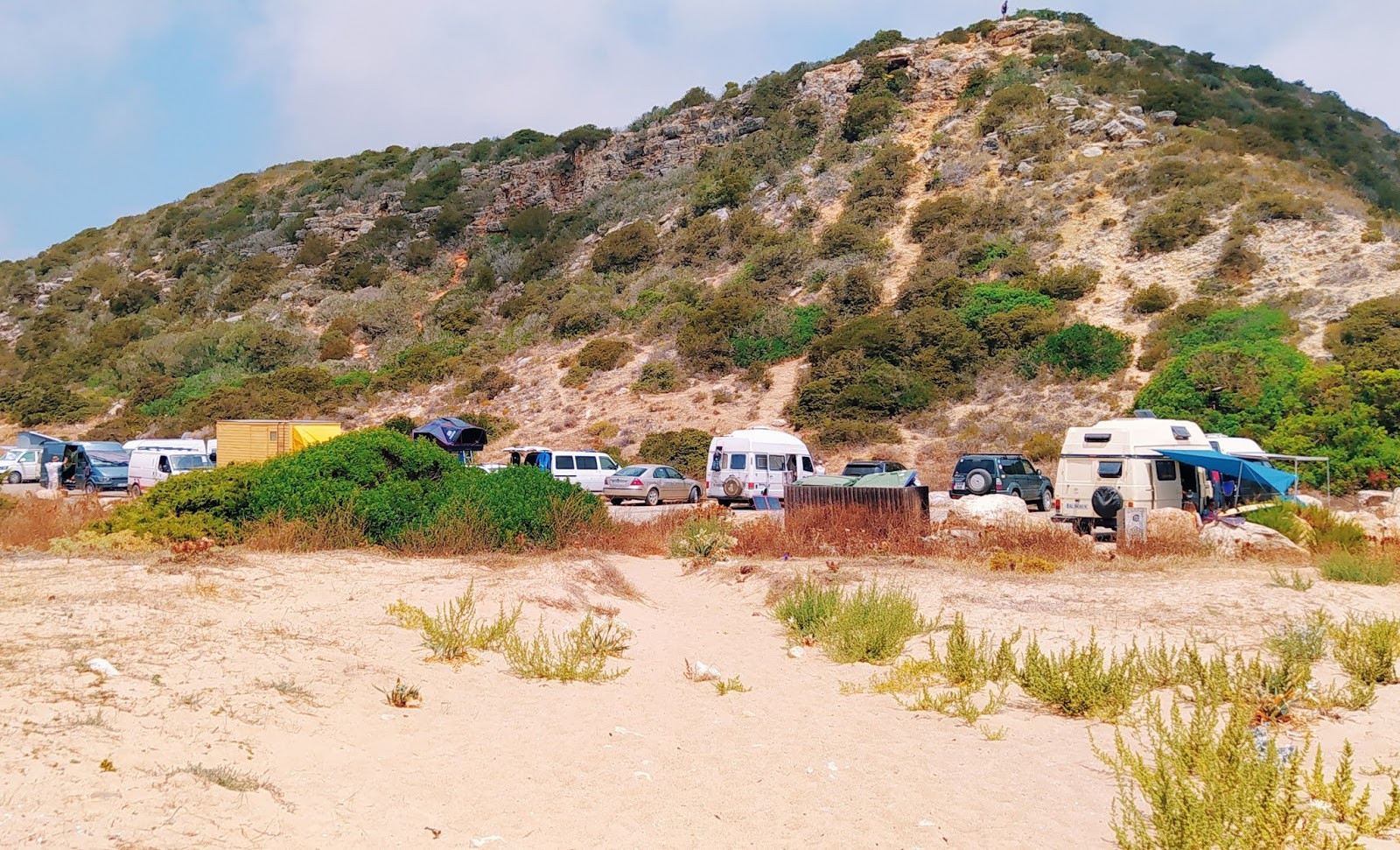