Paradise lost - the wrecked boats along the coast of Tarifa

- July 28, 2016
Can you imagine being so desperate for a better life that you risk death to get it? I don't mean the sort of risks us lucky westerners take most days like crossing the street or driving a car, I don't even mean the sort of risks those more adventurous of us take like sky diving or motorbike racing. I mean crossing treacherous waters in boats not fit for purpose or clinging on to the outside of a ferry.

In November 1988 17 bodies of African immigrants were found washed up on Los Lances beach in Tarifa, Spain. Since then over 20,000 African people have died trying to make the crossing from Morocco to Tarifa over the Strait of Gibraltar. At this point the sea is only about 15km (9.5 miles) across and so is an obvious point to cross. There are also many more people reported missing that are thought to have died making this crossing.

Most people attempting to cross carry out the dangerous journey on small boats known as 'pateras' in Spanish, which means dinghy but more often used to mean a small boat carrying immigrants. These boats are either inflatable dinghies or small wooden boats. There has also been reports of people trying to cross by clinging on to the outside of the fast ferry that crosses a few times a day and hiding inside the propellers of the ferry.

There was a case in Tangiers, where six women and six children drowned after their raft constructed from inner-tubes lashed together broke apart. All the children were under three years old. Authorities said their raft was never really meant to be sea-worthy, but was instead designed to draw attention away from another craft loaded with illegal immigrants that was leaving later the same day. Another boat was so loaded down with people that it broke apart near the beach,a fact that probably saved the 91 people aboard. A large number of the people aboard were women, many of whom were pregnant, and young children.

It is not cheap to try the waters the illegal way. The 35-minute ferry ride from Tangier, Morocco only costs around 25 euros. But with the borders closed to most Africans, human traffickers can charge over 2,000 euros, a price that covers three attempts at getting into Spain, immigration officials in Tarifa said. A flimsy raft loaded with 50 immigrants can make traffickers as much as 100,000 euros in one night.

Officials claim that for every person caught, there are another 4 that are sure to have got away. Red Cross officials claimed that half of the illegals are sub-Saharan's, with quite a few of the women being pregnant. Some of the women though if they were pregnant it might be easier to get residency papers. Others claimed to have been raped by smugglers, according to people at the Red Cross.

Above the town of Tarifa is the cemetery where rows of nameless headstones mark the graves of unknown Africans, buried three deep. These are the corpses of bodies washed up on Tarifa's' shores.

There are some more detailed articles on this subject and some good photographs. What I haven't really seen is photo's taken along the beaches of Los Lances and Valdevaqueros up to and beyond Punta Paloma. So below is some photos I took over a few weeks in Tarifa. 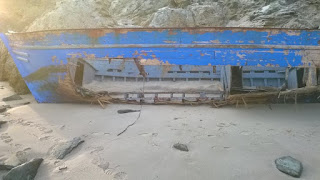 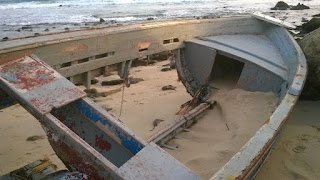 Wrecked boat, how could anyone have survived in this? 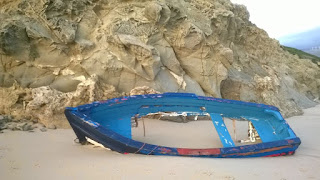 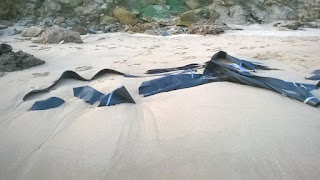 A dinghy slowly getting covered in sand. 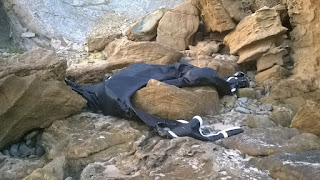 Another dinghy washed up on the rocks. 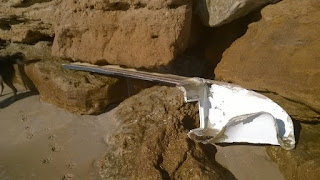 Part of a boat. 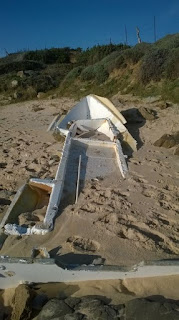 Another boat getting covered in sand. 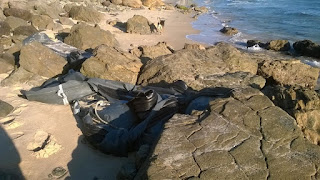 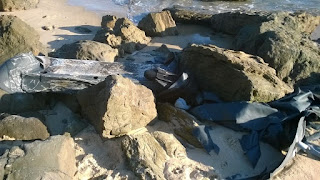 More dinghies washed upon the rocks. 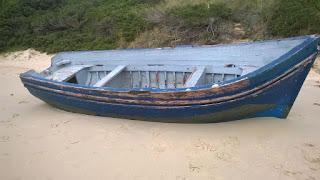 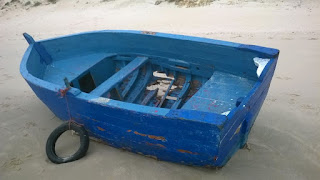 These two boats looked as if maybe people survived and made it to the shore safe. 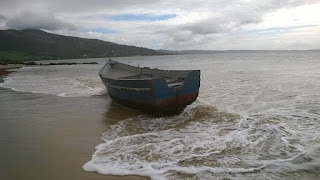 This boat appeared while I was visiting. It had arrived in the night, I'm not sure if the people got away or were arrested by the police as there was news reports of 32 immigrants being rescued at sea. This could have been their boat or it could have been another boat.

There is a good article HERE by Sur in English and some touching photographs HERE from Reuters.